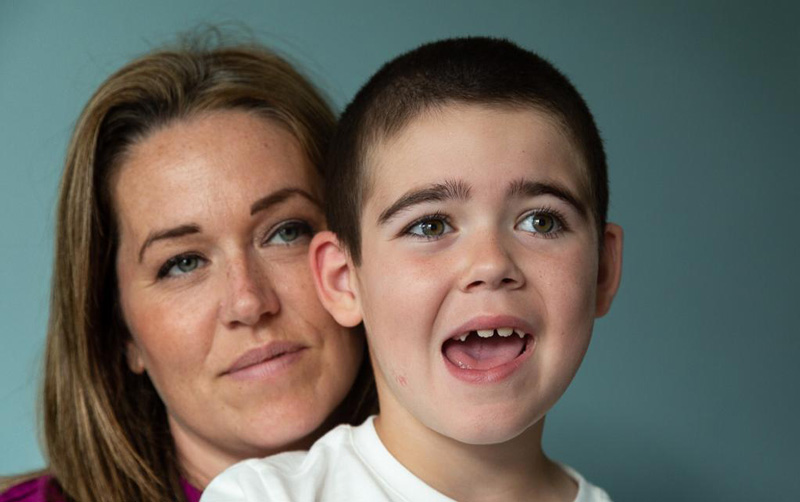 Hannah Deacon, Executive Director, whose son, Alfie Dingley was the first patient in the UK to receive a permanent cannabis licence, tells her story.

When Alfie was born, he spent the first four months of his life in hospital, lived on and off life support and experienced his first seizure at just eight months old.

Alfie lives with a very rare form of epilepsy and, prior to medical cannabis treatment, experienced more than 500 seizures a month. Now, Alfie, aged eight, lives a relatively normal life thanks to using cannabis oil treatment.

After trying various treatments, anti-epilepsy drugs, a ketogenic diet and immuglobulins, the only treatment that reduced his seizures was a steroid called IV Methyl Prednisone that can cause severe side effects, including mood swings, restlessness and headaches.

At age five, Alfie’s condition got worse. He was visiting the hospital every week and receiving up to 25 doses of steroids a month.

In 2019, Alfie’s mum Hannah, took action. After being warned by doctors around the dangers of his seizures and treatment, Hannah began to research other options for her son.

Hannah said: “When doctors advised us on the dangers of Alfie’s treatment, I needed to look into other options. I started to research epilepsy treatments and medical cannabis kept coming up – and felt confident that it was a positive option.

“I wanted to know that whatever happened, I had done everything I could to keep Alfie alive.”

After a series of setbacks from her GP, Hannah was eventually given permission to take Alfie to Holland for medical cannabis where he was assessed and immediately prescribed with the treatment he so desperately needed – Bedrolite CBD oil.

The beginning of Alfie’s miracle

After five weeks of medical cannabis treatment Alfie experienced 17 days without a seizure – the longest amount of he had ever gone without experiencing one.

Hannah said: “It was the beginning of our miracle.

“As time went by, we put up the dose of CBD and Alfie started to get better. We then added in a small amount of THC and he did even better. Treatment with cannabis oil has given Alfie a much greater quality of life and significantly reduced the number of seizures he suffers.”

Fighting for medical cannabis to be available on the NHS

Returning home, Hannah was ready to fight the biggest battle she had ever had – fighting for medical cannabis to be available on prescription for patients.

Hannah started work with the campaign group,’ End Our Pain’.  Appearing on national TV channels, she made BBC Breakfast where she told Alfie’s story.

After meeting with the Home Office but getting nowhere, Hannah submitted the group’s petition to former Prime Minister, Theresa May, and subsequently met with her.

Alfie’s doctor was unfortunately unable to help due to the trust they worked for however, it was then when Hannah met Neurologist and Professor Mike Barnes. When Hannah told Mike about Alfie’s story, he agreed to help.

Hannah said: “Mike stood forward when no one else would. He gave his time and expertise for free because he felt it was the right thing to do. He has now become a lifelong friend and we now work together to improve access to medical cannabis for patients across the UK.”

In November 2018, after a long fight – the law changed which now allows medical cannabis to be prescribed as a ‘special’ by a consultant. Although around 500,000 people in the UK have epilepsy, not one more person has been prescribed the treatment on the NHS since this case.

The NHS is yet to offer medical cannabis on prescription due to very restrictive guidelines for clinicians. There is still a long way to go to ensure more people like Alfie can access medical cannabis to drastically improve the quality of their lives.

Any cookies that may not be particularly necessary for the website to function and is used specifically to collect user personal data via analytics, ads, other embedded contents are termed as non-necessary cookies. It is mandatory to procure user consent prior to running these cookies on your website.