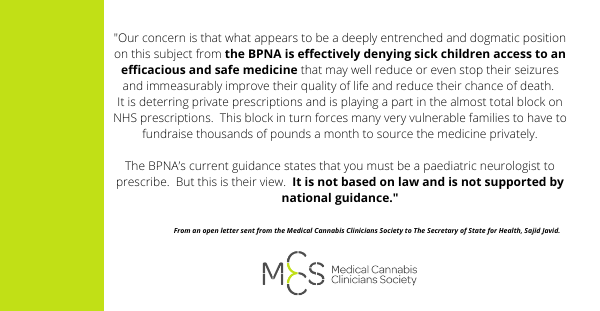 Below is the text of an open letter which has been sent from the Medical Cannabis Clinicians Society to The Secretary of State for Health, Sajid Javid.

Members of The Medical Cannabis Clinicians Society have access to further information including prescribing guidelines, a secure online support network and events – covering what is needed to become a specialist prescriber of medical cannabis.

If you are a Paediatric Consultant of any discipline and would like to consider prescribing, we will provide free CPD-accredited training (online & face to face) and ongoing support and mentoring to you. Find out more about joining us.

Dear Secretary of State for Health and Social Care,

The Medical Cannabis Clinicians Society (MCCS) was created in 2018 to support and educate clinicians who wish to prescribe medicinal cannabis in the UK. Today we write because of our considerable concern about the current situation regarding children with drug-resistant epilepsy who are denied NHS prescriptions for a medicine that has been shown to be life transforming for them.

There is now overwhelming evidence of the efficacy of medicinal cannabis for these children. A recent paper by Drug Science showed that there is a 96% chance of a child significantly improving after prescription of full spectrum cannabis. This is a remarkable statistic given that these children will have been resistant to all licensed anti-convulsant drugs, often suffering from hundreds of seizures weekly and experiencing a very poor quality of life combined with a risk of death. Although this was a relatively small UK study, similar outcomes have been demonstrated in many other larger international studies in children with drug-resistant epilepsy. Also, in more established medical cannabis markets such as Canada, US and Israel, there are now thousands of children with drug-resistant epilepsy who are being prescribed full spectrum products after licenced medications have failed to work, often with dramatic improvements in seizure control and quality of life.  Treating these children with conventional anti-epileptic medicines and other techniques is costing the NHS millions of pounds each year to care for them. However, when using medicinal cannabis products, many of them have remained at home and have had huge improvements in their seizure control and their cognitive development with consequential significant savings to the NHS in terms of pharmaceutical and hospital costs.

The British Paediatric Neurology Association (BPNA) declares itself to be the professional medical body for paediatric neurologists.  Apart from a specific brand (which is not full spectrum) in very limited circumstances that has been through the conventional licencing system, the BPNA appears to be very much opposed to the prescription of medical cannabis products. From what we understand, they appear to want to see more evidence about safety and efficacy and are concerned that these ‘full spectrum’ products are unlicenced.

Both of these points are hard to understand.  By more evidence, we presume they mean evidence generated from Randomised Control Trials (RCTs).  However, full spectrum medical cannabis has many active ingredients and is therefore, by definition, not well suited to such trials. And they seem reluctant ‘in extremis’ to accept the enormous volume of real world and observational evidence. And the fact that a medicine is unlicenced is not a bar to its prescription. Unlicenced medicines are routinely prescribed for a range of conditions.

Our concern is that what appears to be a deeply entrenched and dogmatic position on this subject from the BPNA is effectively denying sick children access to an efficacious and safe medicine that may well reduce or even stop their seizures and immeasurably improve their quality of life and reduce their chance of death.  It is deterring private prescriptions and is playing a part in the almost total block on NHS prescriptions.  This block in turn is forcing many very vulnerable families to have to fundraise thousands of pounds a month to source the medicine privately.

The BPNA’s current guidance states that you must be a paediatric neurologist to prescribe.  But this is their view.  It is not based on law and as we show here is not supported by national guidance.

It is our understanding that such is their strength of feeling on this matter, that the BPNA have referred one doctor who was prescribing such medicines to the General Medical Council (GMC) on the basis that he was a paediatric rheumatologist rather than a paediatric neurologist. Thankfully after careful review this case has now been dropped.  The GMC found no fault and no further action will be taken.  With the permission of the doctor concerned we highlight the following quote from the contribution of the GMC’s own independent medical expert.

“Dr X appears to have provided adequate care to the families who consulted him, with evidence of benefit, and no evidence of harm. The BPNA position that only Paediatric Neurologists should initiate treatment is not supported by other national guidance, and probably not in the best interests of children, as it may impede debate and research into the appropriate use of Cannibidiols (sic) in refractory epilepsy”.

Currently, there are just two paediatric neurologists prescribing for children and one of them is retiring in October.  Soon, there will be only one prescriber for over 100 children currently being administered these medicines and many thousands more who might benefit. This is simply unacceptable and puts the children who have prescriptions at real risk from rebound seizures, if they lose their prescribers.

We are calling on members of both the BPNA and the wider paediatric community to:

We ask that you, as the Secretary of State for Health & Social Care: